Do you need to eat slowly and chew carefully to prevent food getting stuck?  Do you have continuing heartburn or difficulty swallowing despite treatment with prescription strength proton pump inhibitors, such as omeprazole?

You may have a condition called eosinophilic esophagitis (EoE), a chronic allergic inflammation of the esophagus, which can lead to narrowing of the esophagus. Over the past 20 years, EoE has been increasingly recognized as the underlying cause in children presenting with feeding problems, vomiting or failure to gain weight and in adults presenting with difficulty swallowing and food impaction.

The allergic inflammation of EoE is triggered by food antigens. Airborne allergens (such a tree pollen) are reported to play a role as well. The condition is more frequent in males and has a genetic component. Patients with EoE frequently have a personal or family history of environmental and food hypersensitivities, asthma, or eczema. Of note, the foods that tend to get stuck in the esophagus are typically dry, solid foods such as bread and meats, rather than the foods actually triggering the esophageal inflammation and ultimate narrowing.

To reach a diagnosis of EoE, an upper endoscopy is needed. During this procedure, a gastroenterologist inserts a narrow tube down the esophagus, and takes tiny biopsies of the lining of the esophagus. An increase of inflammatory cells called eosinophils in the biopsies is the hallmark of the disease. 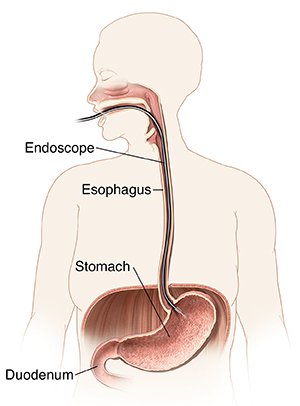 Treatment of EoE is best accomplished by the combined efforts of an allergist and a gastroenterologist. The goal of treatment is to resolve both the symptoms and the esophageal inflammation. Treatment can include dietary therapy via elimination of triggering foods, and medication. If the inflamed esophagus is significantly narrowed, dilation of the esophagus may be needed.

Allergy skin testing to relevant foods can help guide the decision of which foods to eliminate from the diet. Cow’s milk is the most common food triggering EoE. Identification and avoidance of environmental allergens is thought to be helpful as well.

Drug treatment includes a trial of proton pump inhibitors, as some patients with EoE are responsive or partially responsive to these drugs.  Topical treatment with a form of swallowed glucocorticosteroid is the most effective treatment in the majority of patients: significant improvement tends to occur within a few days after starting treatment.

Early diagnosis and treatment of EoE can prevent complications and improves the long-term quality of life. Contact us for more information or schedule an appointment if you have questions about this disease.